I suppose I would make the best candidate to tell you my story.

I was born in the city of Irkutsk, Siberia. All my family were somehow connected with art: back then my grandmother was a troupe director in the Irkutsk Musical Comedy Theatre, my grandfather was a performing comic actor and a great reciter, and my parents were TV reporters.

During our school years, my twin brother Zhenya and I used to sing in a choir and play the guitar in the courtyard trying to attract girls’ attention – just like many guys of my age. At that time, I couldn’t even imagine that this would  become my profession some day. But it looks like I’m running a few steps forward.

My parents’ work implied moving frequently from place to place. It just so happened that in Irkutsk I started playing the piano, in Chelyabinsk I tried the baritone horn, and in Krasnoyarsk I mastered the trombone.

In 1991, my family moved to Moscow, where I entered theIppolitov-Ivanov Music College majoring in trombone. Later, I served in the army, being a member of military orchestras.
Having left the College I spent the whole year preparing to enter the musical theatre department of the State Institute of Theatre Arts (GITIS) and I nearly failed. The very first exam – which was vocal – resulted in a “C.” It was only because of the lucky chance to show my vocal abilities one more time, which our master Georgy Ansimov gave me during a colloquium, that I was enrolled. (I performed a fragment of a Russian folk song Along the Wild Steppes of Zabaikalye.)

Students’ life is always fun and much so that of an artistic college students! My fellow students and I went on a tour to Armenia with the opera Anush, I played Kostya Treplev in Chaika (The Seagull), Don Quixote in Man of La Mancha, a servant in The Bear, and Ambrose Kemper in Hello, Dolly!

After getting a diploma of a Musical Theatre Actor I started to work at the Moscow Jewish Theatre Shalom. Back then, I didn’t feel I would stay there for long. But as the saying goes there is nothing more permanent than something temporary, so now it has been six years since I joined the theatre troupe.

In 2006, I got a diploma at the International Contest Yalta-Moscow-Transit in the Musical Genre nomination; in 2008, I won the Second Prize at The Barry Alexander International Vocal Competition (BAIVC). I have been on tours around the USA, Israel, and the former USSR countries a number of times.

In March 2010, an entreprise play Let Me Introduce Myself: Yves Montand had its opening night in the Open Stage Theatre, Moscow. This is our team-work with Irina Zaitseva, an actress of the Luna Theatre, Moscow.

A profession of a musical theatre actor is an extremely interesting thing as it gives me an opportunity to do everything I love so much: dancing, acting, and of course – singing!... 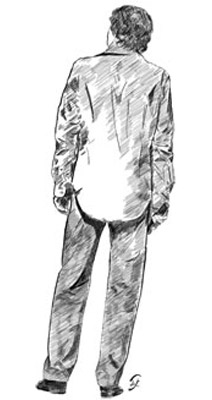